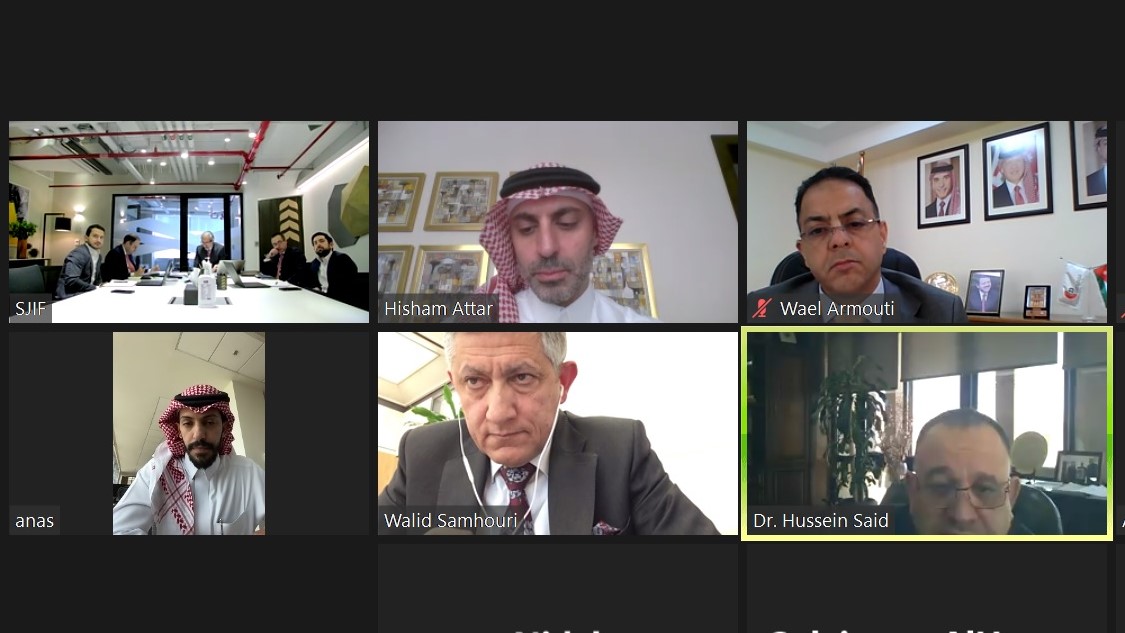 The Saudi Jordanian Investment Fund (SJIF) held its fifth Annual General Assembly meeting on Thursday April 21, 2021, via teleconference, in compliance with the Defense Law No. (13) of 1992, Defense Order No. (5) of 2020, and the instructions issued by the Minister of Industry, Trade, and Supply on April 9, 2020.
The meeting was chaired by Mr. Hisham Attar, the Chairman of SJIF, and attended by all of the company’s shareholders, its Board of Directors, and senior management, as well as the Companies General Controller, Dr. Wael Armouti, and the company’s external auditors, KPMG.
At the meeting, shareholders were briefed on progress of SJIF’s investment projects and plans for 2022.
In his remarks during the meeting, Attar reaffirmed the company’s commitment to supporting Jordan’s economic growth through long-term investment projects in strategic sectors that hold sustainable economic and developmental impact, stressing that this commitment reflects the visions of the leaderships of both countries, and the Saudi Vision 2030, as well as Public Investment Fund (PIF) strategy which aims to enhance bilateral economic cooperation.
He pointed out to SJIF’s investment mid last year in OpenSooq, a leading mobile classifieds marketplace in the region, as the investment aimed at supporting OpenSooq’s plans for expansion in the regional market.
Attar indicated that SJIF is currently in the final stages of signing agreements with the Jordanian government and international partners, to implement its USD 400 million healthcare project, which will consist of a general academic hospital that includes 300 beds, and a medical university with a total capacity of 600 students, and a projected annual student intake of 100 students.
He noted that the company is looking at a number of projects and investment opportunities in vital sectors, including infrastructure, tourism, education, and energy, among others.
The General Assembly meeting further discussed and approved the Board of Directors’ report and the audited annual financial statements for 2021. The General Assembly also approved absolving the Board of Directors from liability for the fiscal year ending December 31, 2021, and the appointment of KPMG as the external auditors for the fiscal year 2022.
The Saudi Jordanian Investment Fund is a Jordanian Limited Public Shareholding Company formed in 2017 as a partnership between the Public Investment Fund of Saudi Arabia, which owns around 92% of the company, and 16 Jordanian banks, which own the remaining 8%. The company was registered per the Jordan Investment Fund Law No. (16) of 2016, and its formation was an outcome of the Saudi Jordanian Cooperation Council and the MOU signed between the Public Investment Fund of Saudi Arabia and the Jordan Investment Fund on August 25, 2016.
The company’s Memorandum of Association and Articles of Association were signed during the visit of the Custodian of the Two Holy Mosques King Salman bin Abdulaziz Al Saud to the Hashemite Kingdom of Jordan on March 27, 2017, in the presence of His Majesty King Abdullah II, at the Royal Hashemite Court in Amman
SJIF’s investment strategy focuses on three verticals: infrastructure projects based on a public-private partnership (PPP) framework, strategic sectors including healthcare, information technology, and tourism, and growth capital investments supporting the expansion of promising Jordanian companies.